Skydiving in the extreme mountain environment of Everest Region is a big challenge in itself. From procuring special permits to arranging logistics and ensuring nothing untoward happens during the event, it needs a lot of hard work, determination, skill and planning to hold an event of this caliber in the Himalayas. With some of the best names in the world of professional skydiving and high altitude adventure, our team has been successful in achieving flawless performance since Day One. Throughout your adventure, you will be accompanied by the best skydivers in the world, mountaineering specialists, high altitude medical doctors and highly skilled mountain pilots. Leave worry behind andenjoy the adventure, you are in the best hands!
Suman Pandey (Team Leader) 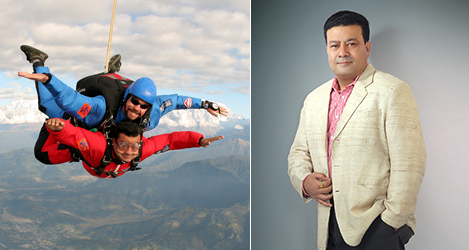 At a time when most Nepalese hardly knew what skydiving is, Mr. Pandey went ahead and introduced this adventure in his mountainous country – the first in Nepal as well as in South Asia. It took a lot of perseverance on his part to make it possible in Everest Region. Mr. SumanPandey continues to be at the helm of affairs of Everest Skydive, charting out new plans and looking for ways to make the skydiving adventure in Nepal more challenging and exciting. Widely known as an innovator in Himalayan adventure, he is also the mastermind behind many iconic events like the GKN Mission Everest, Nepal Government’s Highest Cabinet meeting, Racing the Planet Nepal, Himalayan Travel Mart and many more.

Throughout his service, he has led Nepalese Tourism Industry by undertaking various responsibilities including President of Trekking Agent's Association of Nepal (TAAN) from 2001-2003, Executive Member of Nepal Tourism Board (NTB) from 2004-2006, General Secretary of Airline Operators’ Association of Nepal (AOAN) from 2007-2015, Executive Member of Nepal Tourism Year-2011 and Chairman of Pacific Asia Travel Association (PATA) from 2013-2018. For his remarkable contribution in Himalayan Tourism, Mr. Pandey has been adorned with the prestigious titles includingSuprasiddhaGorkhaDakshinBahu (2004) by Nepal Government; Lifetime Achievement Award by American Biographical Institute (ABI) based in the United States in Raleigh, North Carolina in 2008; “Tourism Man of the Year-2010” and “Lifetime Achievement Award-2017” by Gantabya Nepal; “Tourism Icon-2018”; and many more.Recently, he has been appointed as Member of “Think Tank of Nepali Tourism” by The Ministry of Culture, Tourism and Civil Aviation (MoCTCA).
Tom Noonan (Chief Technical Director) 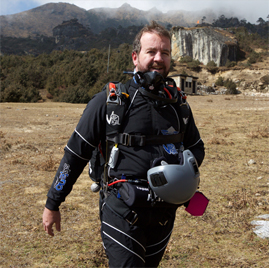 Tom Noonan is a USPA Tandem Instructor-Examiner, USPA AFF Instructor, USPA Safety & Training Advisor (S&TA) and USPA Instructor Examiner Rating Course (IERC) Director with 4000 + jumps. He also holds a FAA Senior Rigger certification. A Tandem Program Director at UPT and Owner at TMN Adventures LLC, he has been with Everest Skydive since its launch in 2008. He is now leading the team as Operations Director.
Paul Henry de Baere (Media & Communication Director and Videographer) 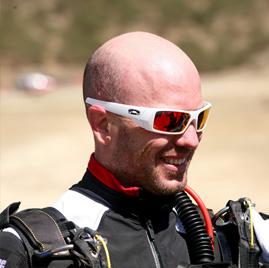 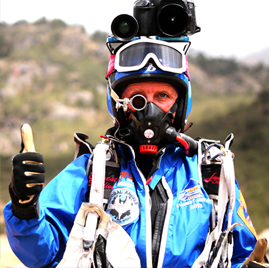 AGuinness Book record holder and award winning Skydiver, Wendy Smith is an AFF Instructor and Chief Safety Officer NZPIA for parachuting operations. She is a founder and coach of Freefly Kiwi School of Body Flight and Ambassador for Global Angels Charity Organization. Her impressive records include nine international records and nine world records (in different disciplines), HALO record skydive from 30,000ft (2010), 20,000 + skydives and many more. She has also produced, filmed and participated in extreme skydiving movies at the cutting edge of sport skydiving and published a photographic book, ‘Eyes in the Sky’, to compliment her years in sport skydiving. The Chief Coordinator of Everest Skydive team from 2009 to 2011, she now works in the team as a Chief Advisor& Videographer.
Omar Alhegelan (Videographer) 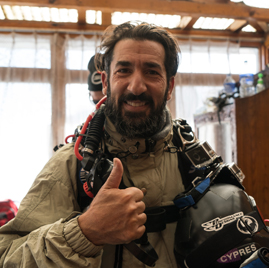 A pioneer of “free flying”, Omar Alhegelan is a World Champion Skydiver & multiple BASE &Freefly world record holder, an artist, photographer, actor & stuntman. Also the former Board of Directors Member at Skydive Dubai and Co-founder at Flight Club LLC., he has received every single record breaking accolade related to Freestyle Skydiving. He was a part of an international group of amateur and professional skydivers at Everest Skydive 2008 and has been with the team as videographer ever since. He’s highly sought after to perform in the international skydiving community.
We use cookies to ensure that we give you the best experience on our website.
I accept