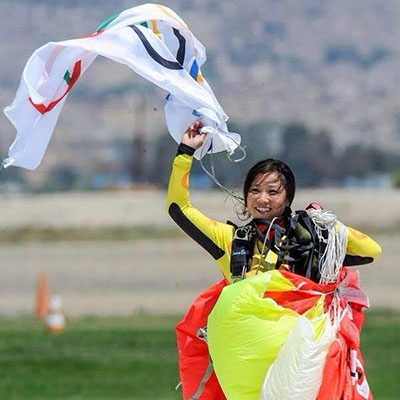 Yin Yu, a celebrated AFF coach and judge with more than 1000 jumps in many exotic destinations, is the highest altitude exit record holder and the first AFF-l in the history of Chinese skydiving. She has assisted over 400 Chinese students through AFF course and programs. She has also been co-coaching team China with US World Championship since 2011. As an expert skydiver and exclusive Team Consultant to Team China, she has been working as a judge in many prestigious national and international Skydiving Championships since 2012.

Beside her involvement as an active sportsperson, she has also shown proven managerial and creative skills both in and out of the field. She also works as a team leader in AUV LLC, a search and navigation equipment manufacturer headquartered in the US. Her duty includes focus on performance education and dealership & management of skydiving and tunnel flying. An MBA graduate from University of Chicago Business School, she has worked as Marketing and Sales executive for Fortune 500 companies with specialties in China Markets, Skydiving and Wind Tunnel for 10 years. She is also a Skydive Ambassador of China advertisements, competitions, teams and educational videos with an impressive media presence. A writer and composer, she has also gained an international recognition as a winner of National Story Writing Award for “Blossoming in the Dark” (2004) and Best Composer of song of China National M-Zone Musical Competition (2005).